In the Face of Evil: Reagan's War in Word and Deed – DVD 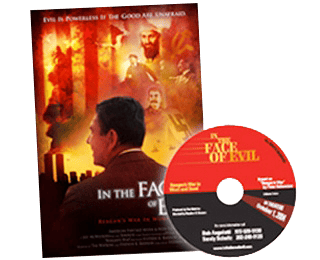 More than a traditional war film, In the Face of Evil plays out on an epic scale... from the back-lots of Hollywood, to the jungles of Central America; from the mountains of Afghanistan, to the palaces of the Kremlin; to the Brandenburg Gate in the heart of a divided Berlin...

In the Face of Evil details, for the first time, with never-before-seen footage, the top-secret plans of Reagan and his inner circle ... and their brick-by-brick takedown of the “Evil Empire.”

With the world mired in the beginnings of a new global conflict, In the Face of Evil is more relevant today than ever. The film affords profound insights on the brutality of the last century and offers a prism through which we can gain perspective on the bloody conflicts that stretch ahead.
As the 21st century’s great conflict between freedom and Islamic Fascism takes shape, In the Face of Evil, and the words and deeds of Ronald Reagan, provide an invaluable lesson for how the U.S., and the free world, must combat the forces of Evil... if we are to survive.

PRAISE FOR IN THE FACE OF EVIL

“[A] powerful portrayal of a critical point in history that exposes the intensity of the struggle against communism and President Reagan’s campaign for victory. As someone who had lived these times, I was very moved by the detail and emotion … brought out on film. The lessons of our struggle against the evil empire are more relevant than ever in regards to the conflict of today’s world.” – Lech Walesa, Nobel Laureate and former President of Poland

“A film of unusual scope and richness that clarifies the present struggle against terrorism as a continuation of the last century’s war against totalitarianism.” – The Liberty Film Festival after ranking the film the Best Documentary of 2004